AS A THIEF IN THE NIGHT 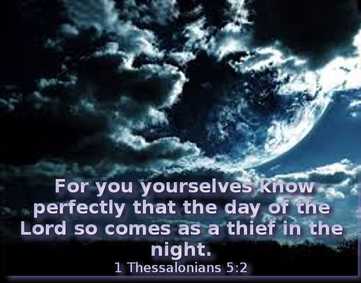 ROMÂNĂ
Jesus is coming and as a “thief in the night.” The biblical terminology about “coming as a thief in the night” is used by many to say or imply that Jesus is coming like the kind of thief that afterward, no one will even know He came and snuck away with His church. This is a false interpretation of what the Bible means. The true meaning is to “take by surprise.” And the Lord makes it clear to His church through His Word, that He does not want us to be taken by surprise but on the contrary for us to be faithful, alert and watching.

This phrase is not about the Lord being like “the kind” of a “thief” that would come in the night by sneaking in and sneaking out. In the day and age of Jesus and the apostles, most people lived in one or two room houses. Anyone would know when someone came in or out, including in the night. Jesus will be coming “like” a “thief in the night” in that “He will take the world by surprise” when He comes to get His church.

When the Lord returns for us, His coming will illuminate the whole earth. The sun, moon and even the stars will have previously gone dark, the whole atmosphere will roll back like a scroll and every eye will see Him just as the Bible says. It will also be when the enemy will be saying “peace and safety” but to their surprise, the Lord will be coming and with His throne (more can be read about a visible rapture in the article, Every Eye Will See Him). The rapture will not only be the deliverance of the persecuted church but following it will be beginning of the outpouring of God's judgment and wrath upon those who will worship the beast and receive his mark.


The very definition of the word “harpázō” that we get the word “rapture” from, is to openly and forcibly snatch something from someone.

Strong’s Greek Concordance, #726, harpázō – properly, seize by force; snatch up, suddenly and decisively – like someone seizing bounty (spoil, a prize); to take by an open display of force (i.e. not covertly or secretly).

Let's look at some of the Scripture involved.


Verse 4 above says “But you, brethren, are not in darkness, so that this Day should overtake you as a thief.” This clearly shows that God does not want His children surprised.

“The coming of the Lord” will be “unexpected” by those who “are not watching and waiting” for Him.

This great day will surprise the lost “as" a “thief in the night.” But God's people - who are not of the night nor of darkness - will be looking for Him. God's people know the signs and nearness of His coming and are watching for Him.

The Amplified Bible has verse 4 as this: “But you are not in [given up to the power of] darkness, brethren, for that day to overtake you by surprise like a thief.”

We must be careful of what books we may read or media we may watch or listen to, that are unscriptural, because the enemy always tries to twist God's Word just as he has done since the Garden of Eden. He longs for Christians to be complacent or off-track. We must study our Bibles for our own selves and filter everything we read, see and hear by it.

One particular part of the common misconception of “Jesus coming as a thief in the night” is an erroneous twist on the following verses:


This is about expectation and surprise. One group caught off-guard and the other group, ready and waiting. Nowhere does it say anything about being invisible, not in these verses or anywhere else. As a matter of fact, how could the “ones not ready,” be surprised if they do not see it?

Let's look at some of the openness and visibility of the rapture and surrounding events as shown in the Bible.


The two angels (sometimes angels are described as men in white apparel) that were present when Jesus left, said that He will return in the same manner. What did they mean? One possibility is that He ascended openly and went up with a cloud and will return openly with a cloud.

So the event most similar to what was being referred to in Acts 1:9-11 would be the rapture. He must have ascended in the daylight for it is not stated to have been night-time nor do people normally look up in the sky and see clouds other than daytime. Even in Acts 1, verse 2, Luke referred to the event as “the day in which He was taken up” and not “the night” He was taken up. The point is that the Lord did not sneak away in the night. He left openly in the day. And as He ascended, a cloud received Him out of their sight.

Please consider the next verses.


These verses show that the whole earth will go dark just prior to the return of the Lord and that the powers of the heavens will be shaken. It would be kind of hard for any living human being not to be keenly aware that a globally monumental event will be going on. It describes the Lord as being seen coming on the clouds of heaven and with power and great glory. The earth will go from a normal day to utterly dark and then with the grand view of the Lord illuminating the earth in His power and glory. No one will miss out on seeing it as the following verses show (starting with the last verse in the preceding section).


Why would anyone mourn His coming? Only the bad guys will mourn His coming and they surely will, when “they see” “the Son of Man coming on the clouds of heaven with power and great glory.” Verse 30 clearly says they will see the Son of Man. So the Lord is not “a thief” in the night, it is the surprise aspect of “coming as a thief,” just as Jesus warned of.

It is recorded in two Gospels, that Jesus told some of “the evil ones” that they will “see Him coming.”


And the apostle John recorded in his last book,


How will they see Him coming when they have been dead for almost 2000 years? Because it is seen in heaven, earth and even in hell; encompassing all of creation. And after the Christians are “raptured up” and the 144,000 are sealed for their safety, the judgment and wrath of God will come upon the earth and all that are left upon it.

Why would the wicked cry out and run and hide if they do not see the Lord coming?

At the 6th seal, which is part of the rapture together with the 7th seal, we see this:


This could only be at the rapture and not at the Battle of Armageddon (at the end of the 7 years), because at that time, He is coming on a white horse with an army on white horses, not with a throne and with clouds (Revelation 19:11-15).

This fits perfectly with what Jesus spoke of, as recorded in the Gospel of Luke:

And because it is an event that all will see; there will be nothing secret about it. The coming of the Lord will completely take the wicked by total surprise. The Two Witnesses will have been killed, resurrected to life again and are raised up with the saints at the rapture. The sky will roll open like a scroll and every eye will see Jesus.

The Lord will be coming to “gather the saints up unto Himself” as Paul recorded in 2 Thessalonians 2:1 and it will come as a surprise to the wicked. The Two Witnesses will lie dead in the street for 3 ½ days while the world (“the lost” of the world) rejoices and even parties (Revelation 11:1-12). After 3 ½ years of hearing the Gospel and the Two Witnesses standing in opposition of the wicked one and his followers, the evil ones are who will be saying “peace and safety” as referred to in the following verse:


When the Lord comes for His saints, to Him it will be a harvest. He will be separating the sheep from the goats, the wheat from the tares. It will be deliverance for the true followers of Jesus Christ who will have been under severe persecution for their faith and at the end, for refusing to worship the Antichrist and take his mark. To the 144,000 Jews, 12,000 of each tribe, it will be a time of rescue also. They will have finally realized that the Antichrist was actually a false Messiah and will have been making sacrifices in the temple in Jerusalem right up until the sacrifices are taken away and the abomination of desolation set up. Due to the unique circumstances for them, they will have been on the run for refusing to worship the Antichrist and take his mark and they will be sealed for the last 3 ½ years, for their protection. They will believe on Jesus Christ but not in time for the rapture. But to the wicked, it will be surprise and shock; it will be the beginning of their end. Once the Lord comes and the saints are removed and the 144,000 sealed, judgment will begin with the trumpets and bowls of God's wrath.

ANCIENT JEWISH WEDDING CUSTOMS & JESUS CHRIST, HIS BRIDE, THE CHURCH
See some of the amazing correlation of the ancient Jewish wedding customs and the rapture.
AS IN THE DAYS OF NOAH
Taking a deeper look at what Jesus said in this verse.
CAN THE RAPTURE REALLY HAPPEN TODAY?
Are there events that must be completed first?
CONSIDERATIONS FOR REAL REVELATION UNDERSTANDING
A little help for greater understanding.
﻿﻿EVERY EYE WILL SEE HIM
Jesus is coming for His bride. And He is not eloping. The rapture will be a huge event.
EVERY KNEE WILL BOW
Father God will have His Son honored.
IN THE TWINKLING OF AN EYE
Something happens in the twinkling of an eye, but it's not the whole rapture.
SOME KEY﻿ COMPONENTS ﻿TO THE BOOK OF REVELATION
An overview to help organize thoughts.
THE APOSTASY - THE GREAT FALLING AWAY
Understanding 2 Thessalonians 2:3.
THE BIGGER PICTURE, UNDERSTANDING GOD, THE DEVIL AND THIS DAY AND HOUR
We need to see the bigger picture of all that the Bible says about these times, to understand what is really happening.
THE LAST TRUMPET
Is the great trumpet blast of the rapture one of the 7 trumpets of the book of Revelation?
THE LAST TWO GREAT BATTLES
See the timing of battles of Armageddon & Gog-Magog.
THE OPPORTUNITY OF SALVATION DOES NOT LAST FOREVER
Once the rapture & accompanying events are over, God's wrath begins.
TWO DIFFERENT HORSES, TWO VERY DIFFERENT RIDERS, ﻿TWO DIFFERENT﻿ TIMES
The rider of the white horse at the first seal is not the same rider of the white horse at Armageddon.


Copyright © 2014/2018 E. Cockrell May be used for personal study or instruction but shall not be copied and/or distributed in whole or part without permission or for financial profit.