THE APOSTASY - THE GREAT FALLING AWAY

Let no one deceive you by any means; for that Day will not come unless the falling away comes first...
2 Thessalonians 2:3 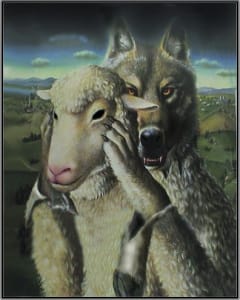 ROMÂNĂ
The Bible says there must be a time of falling away, a time of apostasy, and that the son of perdition, the Antichrist, must be revealed before the coming of the Lord and our gathering together unto Him. It also says not to be swayed by anyone who says differently. This includes even famous preachers and theologians of today who say otherwise.

Some say that the apostasy only applies to the church. I believe the meaning of apostasy used here involves all of mankind and that a large majority will forsake “the truth of what is good and moral.” God put a measure of faith and the ability to know right from wrong, in every person. The root of “apostasia” is “apostasion” which is like a divorce. “Apostasion” is a derivative of “aphistēmi” which is akin to remove, revolt, desert, refrain, withdraw.

What would cause people to deflect from and forsake the truth of what is good and moral? It has been said, that if you put “a frog” into a “pot of boiling water,” that it will “leap out right away” to escape the danger. However, if you put a frog, in a pot that is filled with cool and pleasant water, and then “gradually heat the pot until it starts boiling,” the frog will not become aware of the threat, until it is too late. This is a great analogy and shows one of the ways in which Satan gradually draws people away from the truth about what is right and wrong.

Little by little, wickedness has crept more and more into society. Almost all systems of communication and mass media have become infected. Most forms of mass media are owned by people with agendas and whatever comes from them, is either filtered or spun to meet their purposes. Even public education has been corrupted so that many children have become adults with warped concepts, not realizing that they were misled. Most parents did not even realize it was happening.

The devil has many modes of operation in the world we live in. Deception is so rampant; one can hardly know which report to believe about anything. More people are willing to deceive others for whatever their agendas are. Political correctness has become like adult peer pressure. People live in fear of offending someone or being ridiculed; and will not speak up at times when the truth needs to be stood up for. Silence is consent. Temptation is more available than ever. There is an epidemic of the “desensitization of sin” from the devil’s “little by little” technique. The attitude of self-importance is out of control. There is an epidemic of “my wants, my needs, my group, my ethnicity, my rights, including to sin, etc. There are many more "tools" in the devil’s bag of tricks, but these are some that are very obvious.

It seems that often there is little difference in the lives of those who profess to be Christians, and those who do not. The Lord has said, “to be friends with the world, is to be at enmity with God.” Our carnal, human nature is selfish and directs us to "please that nature.” It is in direct opposition of seeking to please God. Human nature seeks self-gratification and is even righteous in its own eyes. The darkness in this world, both human and demonic, hate the Light and are getting bolder and bolder in showing that hate.

Why do people not recognize this evil agenda and the toll it is taking? No matter what trick the devil uses, “people who reject God” are defenseless to recognize the snares set for them and the enemy takes full advantage of it. The more a person rejects the conviction of the Holy Spirit, the more they lose their ability to hear His voice and their moral reasoning, the discernment to recognize right from wrong. Sometimes it has been described as having a seared conscience. When a person continues in a sin, knowing it is wrong, but loves the sin the most, they begin to justify it and become unable to hear correction for their situation. Usually, the only hope of ever being free, is to be given over to it. We are slaves to whatever or whoever we obey, and this is especially true to sin. Sin opens the door to the devil and his demons. He has demons of pride, addiction, hate, greed, lust, rebellion, witchcraft and more. Once those demons have someone, they can only be free if they want it bad enough and sincerely call upon the Lord. This great falling away will be possible because of the love of sin and the refusal of God’s correction.

Couple this with generational curses that come from sin. In order for blessings to be carried down in families, it has to also be possible for cursing. Children are literally blessed for having godly parents and the opposite is also true, children suffer for having ungodly ones.

We have a spiritually dark planet that is growing darker. This type of apostasy is what happened before the Flood and also led to the Tower of Babel. It will happen again but in a greater measure. Many people "playing church" or who are not "truly grounded" in the Lord and His Word, will be drawn into the deceptions of Satan that are increasing from every direction.

Paul wrote in 2 Timothy 4:4, that many will "turn their ears away from the truth." To what extent will the deflection from the truth be? It will be so huge that even some of the elect will fall. Tremendous deception is here already, and even more is coming.


What does “because lawlessness will abound, the love of many will grow cold” mean? When deception and iniquity increase, people hurt each other. Trust will decrease and fear will increase. Life will become more and more dangerous, despite an increase in government. Good will be hindered and evil will be tolerated and even encouraged.


Great delusion and deception will come, that the wicked will be deceived by, because of their spiritual condition.


When a person wants to believe a lie more than the truth about anything, they will be deceived. A person in this condition does not want the truth to be saved from the mistake. This is the case for the wicked of the last days on a large scale. It is not that God does not want them saved but rather that their hearts will brazenly love sin and unrighteousness the most. Please consider this next section of Scripture about the fate of those of "mankind" who reject God and His goodness.


The above verses from the book of Romans, really show how societies (and individuals) that continually reject God, are given over to their own wickedness. Put it on a global scale and we can understand the final global apostasy of this age. Here are some of the other verses about the wickedness of the last days:


The move toward a global apostasy has already begun. This global rebellion against God and His ways will make the wicked easy prey for the delusion of the Antichrist.

The earth is the Lord's, and all its fullness, the world and those who dwell therein.
Psalms 24:1

ANCIENT JEWISH WEDDING CUSTOMS & JESUS CHRIST, HIS BRIDE, THE CHURCH
See some of the amazing correlation of the ancient Jewish wedding customs and the rapture.
AS A THIEF IN THE NIGHT
Discover the real meaning of this often misquoted Scripture.
AS IN THE DAYS OF NOAH
Taking a deeper look at what Jesus said in this verse.
CAN THE RAPTURE REALLY HAPPEN TODAY?
Are there events that must be completed first?
CONSIDERATIONS FOR REAL REVELATION UNDERSTANDING
A little help for greater understanding.
﻿﻿EVERY EYE WILL SEE HIM
Jesus is coming for His bride. And He is not eloping. The rapture will be a huge event.
EVERY KNEE WILL BOW
Father God will have His Son honored.
IN THE TWINKLING OF AN EYE
Something happens in the twinkling of an eye, but it's not the whole rapture.
SOME KEY﻿ COMPONENTS ﻿TO THE BOOK OF REVELATION
An overview to help organize thoughts.
THE BIGGER PICTURE, UNDERSTANDING GOD, THE DEVIL AND THIS DAY AND HOUR
We need to see the bigger picture of all that the Bible says about these times, to understand what is really happening.
THE BRIDE OF CHRIST
The Lord is coming back for His church, His bride, that will be faithful and true, even through very hard times.
THE LAST TRUMPET
Is the great trumpet blast of the rapture one of the 7 trumpets of the book of Revelation?
THE LAST TWO GREAT BATTLES
See the timing of battles of Armageddon & Gog-Magog.
THE OPPORTUNITY OF SALVATION DOES NOT LAST FOREVER
Once the rapture & accompanying events are over, God's wrath begins.
TWO DIFFERENT HORSES, TWO VERY DIFFERENT RIDERS, ﻿TWO DIFFERENT﻿ TIMES
The rider of the white horse at the first seal is not the same rider of the white horse at Armageddon.


Copyright © 2015 E. Cockrell May be used  for personal study or instruction but shall not be copied and/or distributed in whole or part without permission or for financial profit.
​​OUR NEW BOOK ABOUT THE END TIMES
IS NOW AVAILABLE!