FORGIVENESS IS STILL AVAILABLE TO THOSE WHO REPENT - RETURN TO THE LORD! 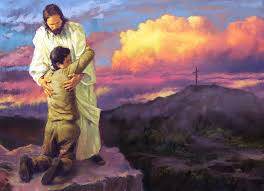 ROMÂNĂ
Were you at once “born again” and “right with God,” but “something happened”? Did you stray from the right path and now want to come home?

For some reason, the devil and even people, have convinced some people, that people cannot return to the Lord. Nothing could be further from the truth.

Like the father of the prodigal son, the Lord has longed for your return.

Joel 2:13 “So rend your heart, and not your garments; return to the Lord your God, for He is gracious and merciful, slow to anger, and of great kindness;”

Romans 11:22-23 “Therefore consider the goodness and severity of God: on those who fell, severity; but toward you, goodness, if you continue in His goodness. Otherwise you also will be cut off. And they also, if they do not continue in unbelief, will be grafted in, for God is able to graft them in again.”

Luke 15:3-7 "So He spoke this parable to them, saying: "What man of you, having a hundred sheep, if he loses one of them, does not leave the ninety-nine in the wilderness, and go after the one which is lost until he finds it? And when he has found it, he lays it on his shoulders, rejoicing. And when he comes home, he calls together his friends and neighbors, saying to them, 'Rejoice with me, for I have found my sheep which was lost!' I say to you that likewise there will be more joy in heaven over one sinner who repents than over ninety-nine just persons who need no repentance."

The devil is a liar. And as long as you can hear the Holy Spirit drawing you back to God, there is hope. Without the Holy Spirit a person would not even have the desire to be right with God. Anyone who misquotes the Bible that “a person cannot return unto the Lord” would be doing just that; taking something out of context.

Luke 15:21-24 "And the son said to him, 'Father, I have sinned against heaven and in your sight, and am no longer worthy to be called your son.' But the father said to his servants, 'Bring out the best robe and put it on him, and put a ring on his hand and sandals on his feet. And bring the fatted calf here and kill it, and let us eat and be merry; for this my son was dead and is alive again; he was lost and is found."

Consider the disciple and apostle Peter. He spent 3½ years as an original disciple of Jesus Christ. He knew things that only the Holy Spirit could have revealed; such as that Jesus was the Messiah. He is the one that stepped out of the boat to walk towards Jesus. He was with Jesus at the Mount of Transfiguration. He was one of the three closest disciples of Jesus Christ. And he blew it. He backslid so far, that he denied the Lord three times. And the Lord took Him back. The Lord was waiting for Peter, to have gotten that phase of his life out of the way. And if you strayed, He has done the same with you. He is waiting.

Jesus said this to Peter: "But I have prayed for you, that your faith should not fail; and when you have returned to Me, strengthen your brethren" (Luke 22:31-32).

Return, return unto the Lord. Never to stray again. Jesus and the Father have been waiting.

ONCE SAVED ALWAYS SAVED - TRUE OR FALSE?
What is the Bible actually saying about the freedom of choice and right or sinful living?
SALVATION - HOW TO SPEND ETERNITY IN HEAVEN
Jesus Christ is the only way to Heaven. How do we access it?
​MANY ARE CALLED, BUT FEW ARE CHOSEN
​What does it mean to be called and who will be chosen, according to Scripture.
​BIBLICAL WATER BAPTISM
Water baptism is a commandment of Jesus Christ.​
BIBLICAL WATER BAPTISM - BIBLE VERSES
Bible verses about water baptism for thought and analysis.

Copyright ©  2015 E. Cockrell. May be used  for personal study or instruction but shall not be copied and/or distributed in whole or part without permission or for financial profit.