THE PRAYER OF ABRAHAM AND THE DELIVERANCE OF LOT 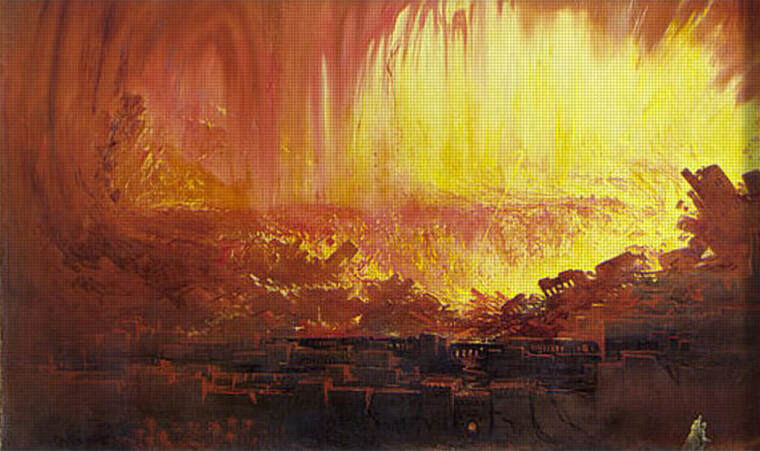 In considering the case of Lot, there are many valuable lessons to be found. Most of us are familiar with Lot, Abraham's nephew that joined him when he left Haran. Like most believers, Lot was not perfect, but despite his problems, God loved and spared him from the judgment of the city he lived in. There is hope for all Christians who struggle with things in their lives or who are not where God wants them to be.

The Scripture is clear on this. However, Lot literally had to be removed from Sodom. And even though counted righteous, some of Lot’s actions have been considered by some as deplorable. Lot’s interactions with the angels that came to rescue he and his family seem disturbing, and later his daughters were able to get him intoxicated and entice him into sexual relations.

Previously when Abraham and Lot separated because their herds and herdsman required more space, Lot chose the extraordinarily, blessed plain of Jordan as his new home. He saw that it was “well watered everywhere […] like the garden of the LORD, like the land of Egypt as you go toward Zoar” (Genesis 13:10).

While in 2 Peter 2:7-8, it says that Lot was counted righteous, he was also “oppressed by the filthy conduct of the wicked (for that righteous man, dwelling among them, tormented his righteous soul from day to day by seeing and hearing their lawless deeds)—"

The land was amazing, but the people were very evil. It says that Lot sat at the city gate. This means that he was counted as a judge, as in settling disputes which might have been many. History shows that most likely, these were not villages but large cities. It is amazing that there were not even ten righteous people available, which would have kept them from being destroyed. The corruption of Sodom and Gomorrah was so great, that also great was their destruction. The Lord incinerated them by “raining brimstone and fire, out of the heavens” (Genesis 19:24).

The book of Peter says that by Lot being among the people there, it tormented his righteous soul from day to day by seeing and hearing their lawless deeds. What does this really mean? The environment of sin was affecting him. In seeing and hearing evil behavior over and over, a person gets conditioned. At first, such things are appalling. But when one deals with it over and over, in time, a person becomes desensitized to such things. The KJV Bible says “his soul became vexed from their unlawful deeds.” The people of Sodom and Gomorrah disregarded doing what was right and chose evil in their ways, becoming more and more evil. And their wicked standards became normal to them. And Lot was affected because of it.


Lot was in bad circumstances and it was about to get perilous.

Lot needed deliverance (2 Peter 2:9). The temptations he was delivered from had been dragging him down spiritually. We can see that Lot was delivered from the brimstone and fiery incendiary judgment that God sent but Lot was also spared from the continuous vexing of his soul from living among them. One might say, Lot’s deliverance also gave him the option to recompose himself from how he had become so vexed and conditioned from living in such an ungodly and wicked place.


The Lord knows how to bring judgment on the wicked and also deliver the righteous.

If you look at the second chapter of 2 Peter, it is about the judgment and mercy of God. It shows how real His judgment is and at the same time, how God knows how to deliver the righteous.

“How and why” did God do this? These are important but dangerous thoughts. We must always be careful in judging others (or not) but even more so, in not misunderstanding or misjudging God. He is God almighty and it is very wrong to do so. But the Lord through Peter, was using history as a warning of how the Lord’s judgment works and how His mercy is given.


The Lord worked through Abraham’s prayer for his nephew. This is great encouragement for all of us.

It was hard for Lot to leave.

For Lot it was not easy to leave the home they had made. His wife was even more connected to it and could not keep from looking back, resulting in her demise. Sodom and Gomorrah were very beautiful cities and with abundant resources even though the people had turned on God and His ways to the uttermost. The Lord literally had angels take them out by their hands.


Those we care about may be in similar situations today.

Not that God is about to send brimstone and fire physically over them, but they are in danger of being drug down to the point of being in spiritual peril. Most of us have loved ones and people we know or work with, that have been similarly conditioned and affected by the evil around them. Our prayers can make the difference. God honored and used Abraham’s prayer to help Lot and his family. The effective and fervent prayers of a righteous person do avail much. But we must recognize the need, decide to stand in the gap in speaking up for them in their distress and put our faith to work in prayer and petition before the Lord.

It seems that Lot really did not want to be delivered. But Abraham’s prayer was remembered before the Lord. Our loved ones and/or those around us in need, may have become comfortable in their situations too. But for God and the prayers prayed for them! If God reveals it to us that there is a need, as He did to Abraham, He is speaking to our hearts for a reason. As God has helped us, let us be used by the Lord to help others. Who will stand in the gap? Let us not grow complacent or weary as we may have prayed for a long time for hard cases. History stands. What God has done for Abraham, He can do for us.

Copyright © 2023 Carmen Pușcaș and Eli Cockrell May be used for personal study or instruction but shall not be copied and/or distributed in whole or part without permission or for financial profit.

OTHER ARTICLES ABOUT COMMITMENT AND SPIRITUAL MATURITY

ABRAHAM'S FAITH WAS HIS RIGHTEOUSNESS
What was true for Abraham can be true for us too.
ABRAHAM'S FAITH WAS ACCOUNTED AS RIGHTEOUSNESS - BIBLE VERSES
Verses on this subject, for study and analysis.
BAPTISM OF THE HOLY SPIRIT
Understanding the importance and impact of the baptism of the Holy Spirit.
BAPTISM OF THE HOLY SPIRIT - BIBLE VERSES
Bible verses about the baptism of the Holy Spirit.​
BIBLICAL WATER BAPTISM
The water baptism is a commandment of Jesus Christ.​
BIBLICAL WATER BAPTISM - BIBLE VERSES
Bible verses about water baptism for thought and analysis.
BY YOUR PATIENCE POSSESS YOUR SOULS
The importance of patience in our christian walk, and how much it changes our lives for the good.
COMMUNION, THE LORD'S SUPPER
Realizing the freedom, joy & benefits in taking Communion.
FORGIVENESS: WHY DOES JESUS COMMAND US TO FORGIVE?
Realizing the power & importance of forgiveness versus the power & damage of unforgiveness.
GOD WILL NEVER FORSAKE HIS CHILDREN
It is up to us to remain in Him, He will never give up on those who love and obey Him!​
GOD WILL NEVER FORSAKE HIS CHILDREN - BIBLE VERSES
Verses on this subject, for study and analysis.
HOW TO HEAR GOD'S VOICE
“Hearing God's voice” is the key to living a victorious and fruitful life for all Christians.
HOW TO KEEP JESUS AS LORD
In God's Word we have all the instructions we need to live right and keep our salvation to the end.
IT WOULD BE HARD TO KICK AGAINST THE GOADS
Once we know that God's will is for us to repent and make Jesus Lord over our lives, the time that our ignorance was allowed, comes to an end.
THE CHRISTIAN'S AUTHORITY
​Understanding the authority we have in Christ, who we are in Him to be able to live a victorious life.​
THE POWER OF GOD'S WORD
What does it take to see the power of the word of God, working in believer's lives?
THE GRACE OF GOD - UNMERITED FAVOR
What does the Bible say about God's grace and its attributes?​
THE GRACE OF GOD - UNMERITED FAVOR - BIBLE VERSES
Bible Verses about God's grace for study and meditation.


Copyright © 2023 Carmen Pușcaș and Eli Cockrell May be used for personal study or instruction but shall not be copied and/or distributed in whole or part without permission or for financial profit.