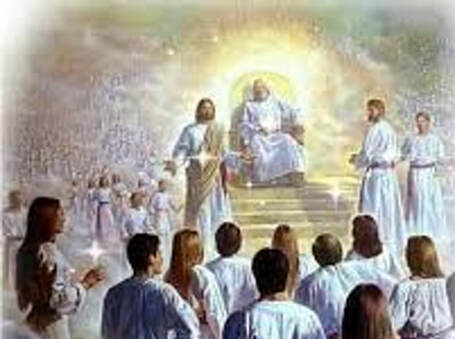 ROMÂNĂ
In heaven, is everyone rewarded the same? Praise the Lord, we know that if we make it through one of the Pearl Gates, then we are granted to eat from the Tree of Life. Eternal life is the gift of God to all His children who turned from sin, became born again and finished the race overcoming.

Revelation 2:7 “He who has an ear, let him hear what the Spirit says to the churches. To him who overcomes I will give to eat from the Tree of Life, which is in the midst of the Paradise of God."

So, all believers have the gift of eternal life. Then do all “good works” count the same?

First consider this command from the Lord.

Now consider the words of Jesus about the condition of the heart behind the good deed or works.

Mark 12:41-44 Now Jesus sat opposite the treasury and saw how the people put money into the treasury. And many who were rich put in much. Then one poor widow came and threw in two mites, which make a quadrans. So He called His disciples to Himself and said to them, "Assuredly, I say to you that this poor widow has put in more than all those who have given to the treasury; for they all put in out of their abundance, but she out of her poverty put in all that she had, her whole livelihood."

1 Corinthians 3:12-15 “Now if anyone builds on this foundation with gold, silver, precious stones, wood, hay, straw, each one's work will become clear; for the Day will declare it, because it will be revealed by fire; and the fire will test each one's work, of what sort it is. If anyone's work which he has built on it endures, he will receive a reward. If anyone's work is burned, he will suffer loss; but he himself will be saved, yet so as through fire.”

A Christian does not go through Judgment Day like the lost.

At the rapture, “the Day”, whatever good works that were done right according to God, will last and be rewarded. Those that don't measure up, will amount to naught. Only God-approved good works and obedience are going with Christians. Those good works or obedience done for the wrong reasons will be a loss though the person still makes heaven.

Revelation 22:12 "And behold, I am coming quickly, and My reward is with Me, to give to every one according to his work.”

Matthew 25:31-40 "When the Son of Man comes in His glory, and all the holy angels with Him, then He will sit on the throne of His glory. All the nations will be gathered before Him, and He will separate them one from another, as a shepherd divides his sheep from the goats. And He will set the sheep on His right hand, but the goats on the left. Then the King will say to those on His right hand, 'Come, you blessed of My Father, inherit the kingdom prepared for you from the foundation of the world: for I was hungry and you gave Me food; I was thirsty and you gave Me drink; I was a stranger and you took Me in; I was naked and you clothed Me; I was sick and you visited Me; I was in prison and you came to Me.' Then the righteous will answer Him, saying, 'Lord, when did we see You hungry and feed You, or thirsty and give You drink? When did we see You a stranger and take You in, or naked and clothe You? Or when did we see You sick, or in prison, and come to You?' And the King will answer and say to them, 'Assuredly, I say to you, inasmuch as you did it to one of the least of these My brethren, you did it to Me.'

The following verse shows that there is a great reward for persecution.

Luke 6:22-23 “Blessed are you when men hate you, And when they exclude you, And revile you, and cast out your name as evil, For the Son of Man's sake. Rejoice in that day and leap for joy! For indeed your reward is great in heaven, For in like manner their fathers did to the prophets”

In the following verses, a prophet's reward, a righteous man's reward and a disciple's reward are mentioned.

For sure later and some even now. This principle is shown to us here, not just for the giving of money as many love to quote it for, but it is actually given to us in regard to the condition of the heart. Are we being gracious or ungracious; condemning or uncondemning, forgiving or unforgiving, giving or not?

Look at the following promise for forsaking all for the Lord and the Gospel's sake.

Mark 10:29-31 So Jesus answered and said, "Assuredly, I say to you, there is no one who has left house or brothers or sisters or father or mother or wife or children or lands, for My sake and the gospel's, who shall not receive a hundredfold now in this time--houses and brothers and sisters and mothers and children and lands, with persecutions--and in the age to come, eternal life. But many who are first will be last, and the last first."

We see that the Lord is faithful that when we do right, blessing comes in the “here and now” and also “in the age to come.” All who are born again and stay right with God, will make it through one of those Pearl Gates and get to eat from the Tree of Life, but how much treasure is stored up there ahead of us, depends completely on the measure of the goodness of our hearts and our obedience to the Lord in “the here and now.”

In closing, if you should happen here and find yourself in need of deliverance from sin and its consequences, please see the message:

SALVATION - HOW TO SPEND ETERNITY IN HEAVEN

Or if you once were born again and right with God but strayed, see the message:

FORGIVENESS IS STILL AVAILABLE TO THOSE WHO REPENT - RETURN TO THE LORD!
​
Copyright ©  2015 E. Cockrell. May be used for personal study or instruction but shall not be copied and/or distributed in whole or part without permission or for financial profit.

OTHER ARTICLES ABOUT  HEAVEN AND HELL

ARE ALL SINS AND THEIR PUNISHMENT EQUAL?
The wages of sin is death, but all sin is not the same.
HEAVEN - BIBLE VERSES
Bible verses about heaven, the throne of God, the redeemed and much more.
HELL - BIBLE VERSES
Bible verses about hell, the lake of fire and the pit. for study and analyze.
HELL IS REAL
Hell is not only real, it is a place that literally burns with fire and brimstone forever and ever.
PEARL GATES
Considering why God might have chosen "pearls" for the gates of New Jerusalem.
THE UNNAMED RICH MAN AND LAZARUS
​A more profound insight into Jesus' teaching about the life and eternal destiny of Lazarus and the rich man.
WHAT HAPPENS WHEN WE DIE?
The Bible says what happens to us when we die. It is explained here and with the corresponding Bible verses.
​
MAIN MENU - ENGLISH VERSION
​