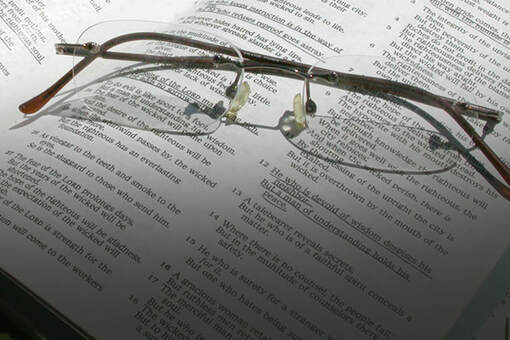 Revelation 9:4 They were commanded not to harm the grass of the earth, or any green thing, or any tree, but only those men who do not have the seal of God on their foreheads.

Revelation 12:6 Then the woman fled into the wilderness, where she has a place prepared by God, that they should feed her there one thousand two hundred and sixty days.

Revelation 12:13-17 Now when the dragon saw that he had been cast to the earth, he persecuted the woman who gave birth to the male Child. 14 But the woman was given two wings of a great eagle, that she might fly into the wilderness to her place, where she is nourished for a time and times and half a time, from the presence of the serpent.15 So the serpent spewed water out of his mouth like a flood after the woman, that he might cause her to be carried away by the flood. 16 But the earth helped the woman, and the earth opened its mouth and swallowed up the flood which the dragon had spewed out of his mouth. 17 And the dragon was enraged with the woman, and he went to make war with the rest of her offspring, who keep the commandments of God and have the testimony of Jesus Christ.

Revelation 14:1-5 Then I looked, and behold, a Lamb standing on Mount Zion, and with Him one hundred and forty-four thousand, having His Father's name written on their foreheads. 2 And I heard a voice from heaven, like the voice of many waters, and like the voice of loud thunder. And I heard the sound of harpists playing their harps. 3 They sang as it were a new song before the throne, before the four living creatures, and the elders; and no one could learn that song except the hundred and forty-four thousand who were redeemed from the earth. 4 These are the ones who were not defiled with women, for they are virgins. These are the ones who follow the Lamb wherever He goes. These were redeemed from among men, being firstfruits to God and to the Lamb. 5 And in their mouth was found no deceit, for they are without fault before the throne of God.

Revelation 18:4-6 And I heard another voice from heaven saying, "Come out of her, my people, lest you share in her sins, and lest you receive of her plagues. 5 For her sins have reached to heaven, and God has remembered her iniquities. 6 Render to her just as she rendered to you, and repay her double according to her works; in the cup which she has mixed, mix double for her.”​

Copyright © 2017 E. Cockrell May be used  for personal study or instruction but shall not be copied and/or distributed in whole or part without permission or for financial profit.

THE 144,000 SEALED JEWS OF THE BOOK OF REVELATION
This article explains what we know about the 144,000 Jews that will be sealed and how they fit into the end of this age and in the Millennium.

THE MARRIAGE SUPPER OF THE LAMB
A marvelous event where we are all invited as the church is the bride of Jesus Christ.
THE LAST TWO GREAT BATTLES BETWEEN GOD AND SATAN
See the biblical truth that Armageddon happens at the end of the 7 years and the battle of Gog and Magog at the end of the Millennium.
THE BATTLE OF ARMAGEDDON
This message reveals the biblical truth about what we can know of this future battle.
THE LORD WILL RULE WITH A ROD OF IRON
This article explains how the Lord will rule with a rod of iron.
THE SECOND COMING OF THE LORD
Jesus Christ will return at the end of this age and set up His millennial kingdom. There are key differences between the Second Coming and the rapture.
THE MILLENNIUM
Jesus Christ will return and reign over this earth for a special 1000 year period, commonly called the Millennium.
THE GREAT WHITE THRONE OF JUDGMENT AND JUDGMENT DAY
This article reveals the truth about what happens and when at the Great White Throne of Judgment on Judgment Day as the Bible shows it.


Copyright © 2017 E. Cockrell May be used  for personal study or instruction but shall not be copied and/or distributed in whole or part without permission or for financial profit.
​OUR NEW BOOK ABOUT THE END TIMES
IS NOW AVAILABLE!