JOB, HIS THREE FRIENDS AND FORGIVENESS 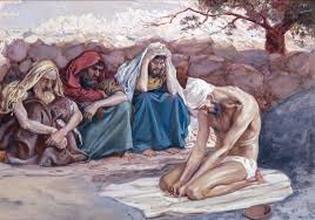 ​As the book of Job concludes, we see that Job and three of his friends needed to repent before God and also work out their differences due to what was done in the midst of Job's travail. Most people when studying the book of Job, look to see how Job's troubles started, progressed and finally ended. But often the conclusion with Job's three friends, seems to go unnoticed.

As we take a deeper look and consider their situation, please review or see for the first time, these verses:


These verses describe, what happened immediately after Job repented before the Lord and the Lord had accepted his repentance (Job 42:1-6). As we see in verse 7, that the Lord had not only had something in particular to say to Job, but additionally to his three friends as they were called to repent by God. These verses show that God's visit with Job was also experienced by Elihu (Job's good, young friend who was prophesying when the Lord came and spoke out of the whirlwind), Eliphaz, the Temanite and quite possibly, Bildad and Zophar. Consider next what the Lord said to Job's friend, Eliphaz.

The Lord said to Eliphaz the Temanite in verse 7,


And the Lord repeats in verse 8 the same thing:


Job had already repented previously and the Lord had accepted his repentance and was not holding anything against him (Job 40:1-2,40:8). But Job's three friends “did not speak right of the Lord” and we know that all three were adamant that God was punishing Job for an unknown sin. In reality, from the beginning, Job had not sinned to cause his terrible trial but God allowed Job to be tested for His own reasons (Job 1:6-12).

Just as a reminder, here are the verses where Job repented:


Job's three friends had done wrong to Job in accusing him of a sin that caused his trial and tribulation. In the midst of Job's terrible trial that he suffered through, his three friends had the unified certainty that God had brought it all upon him because of some sin and that he needed desperately to find it and worked to help Job do just that (Job chapters 4-23). In judging Job that “he sinned and thus caused God to bring the adversity upon Him” - they not only misjudged Job, but also God. And God did not and does not take it lightly when we or anyone else judges Him, including on how He personally handles each of us when we sin or not.

Job struggled in his pain and felt wronged his suffering in that he did live rightly and then what was it all for? But he never did what the devil said he would do. The devil had told God that if He removed the hedge of protection from Job, his household and possession, that Job would curse God. The devil had said to the Lord,


But In all Job's suffering, he never cursed the Lord, especially not to his face.

Back to Job and his three friends. Job's sins were forgiven when he repented in the beginning of chapter 42. But Job's three friends needed forgiveness from Job and they needed it from God as the Lord spoke directly from the whirlwind as to what they needed to do.

The part that is so often overlooked is God's requirement for the three friends forgiveness. The Lord said that they had to bring their sacrifice for forgiveness (the 7 rams bulls and 7 rams), go to His servant Job and make them a burnt offering and have Job pray for them.


Why would their “sacrifices and repentance” alone of sinning against God not be enough to the Lord? Why did God have Job assist in the matter and pray for them?

One definite thought to consider is that it is never enough for us only to ask God to forgive us. Forgiving each other is also necessary for us to God. It is modeled for us by Jesus' prayer directive for us, commonly called the Lord's prayer, in which we are to pray,


and when He concluded the prayer, Jesus followed with


It is not enough for us to only repent “for ourselves” to God. We must forgive others and we must forgive those who have wronged us, to the point of praying for them. Job's three friends were commanded to repent but also to have Job make the offering and pray for them. God wanted Job to forgive and pray for them also. Consider this New Testament verse in understanding God's heart.

As Job's three friends made their sacrifices of repentance and Job forgave and prayed for them to be forgiven; all that God required was met. All had repented before God and those that wronged each other also repented. This shows that the process was not complete until the one who was wronged, prayed for the ones who wronged him.

Most messages today only teach to forgive others because harboring unforgiveness is not healthy. And it is true that bitterness and unforgiveness are extremely unhealthy for the one harboring them. But God requires more. He requires us to forgive others as we are forgiven. He also requires us to love our enemies and pray for those who wrong us and even for those who “persecute and spitefully use us” (Matthew 5:44, Luke 6:28). And Jesus showed us on the Cross how to do it; He prayed “Father, forgive them for they know not what they do.” What Jesus was saying was that He forgave those that brought it upon Him and He wanted the Father to not hold it against them also. Jesus not only did this for those at the time, but also for all of us before we ever repented. He was releasing us to God the Father, so that when we would repent, we would be forgiven. Oh how this point is missed by so many. Forgiving others is critical not only for health of the one wronged but it is this first step in empowering God to work!

The Lord had said to Job's three friends that if they “did not do as commanded in repentance and if Job did not pray for them” - that He would have to deal with them according to their folly.


What was their folly? It was in their “knowing and proclaiming” that they knew that Job had sinned and that God was punishing him for it. And they were wrong. They not only judged God but misjudged Him. How many times we have all made the same mistake, the same sin? Oh Lord forgive us even now. Who are we to say that God brought some misery on someone else because of their sin? And who knows how many other times and ways that we have violated the Lord in similar manners? Lord, help us to slow down and keep clean hearts and minds.

How would God have “dealt with them according to their folly”? We can see that “His wrath” was aroused (Job 42:7). Would anyone of us want to arouse God's wrath against us? At a minimum, it seems that in their cases, that their prayers were hindered until things were made right with God and Job prayed for them.

How much harm today happens in the body of Christ for disobeying God in not forgiving those who have wronged each other and not asking God to forgive them also?

Whenever we listen to and obey God, it opens the door for Him to work in our behalf and the ones we are praying for. When we disregard God and how He wants us to deal with others, then we reject wisdom and open the door for the consequences of disobedience. Sadly, it also empowers the devil to continue his works of hurt, discord and the rest of whatever comes out of his ugly bag. Job's situation is in the Old Testament but God is the same yesterday, today and forever. He is the King of Peace and He is the giver of His grace but He expects us to pass it on. Being vertical with God is not enough; He expects us to be horizontal with our fellow man also.


What do we do in a situation whereupon we asked forgiveness to the Lord for the one who wronged us and the other person does not want reconciliation? Or, we asked forgiveness from some one we wronged? All we can do is our part and leave the rest to God. We are not responsible for what others do but we are certainly responsible to God for what we do. If they choose to forgive us, then it is a great thing because healing can start to begin. If not, then at least we did right and have released it to God. And when we choose not to hold on to any wrongs or bitterness on our part, we empower heaven to work and it also helps us to be able to continue to pray for healing and for God to have His way in whatever the issue is.

Job's restoration seems to have been hinged upon his forgiveness of his three friends and his willing to pray for them in their behalf.


One has to wonder how much restoration has been lost for many, by not praying for the ones who wronged them? Some might say, it is enough to ask God to bless the ones who wronged us. But if we “do unto others as we would have them do unto us” then I suspect we would want them praying for us from a good heart and possibly like Jesus on the Cross praying, “Father, forgive them for they know not what they do.”

Job's obedience in forgiving his friends and praying for them as they who had wronged him, empowered heaven to work not only in his three friends behalf but also in his own. Job's obedience empowered the Lord to restore him for his losses and even restored him double. Obeying and pleasing God is where the blessings and benefits are. And we have the Holy Spirit sent to us in a way that Job did not have. Thanks to Jesus on the Cross, we can be born-again and actually have the Holy Spirit living inside us to guide, teach, strengthen us and help us do all that God expects of us.

Closing prayer: Oh Lord forgive us for not going the second mile on forgiveness. Forgive us for receiving Your grace and not passing it on. Forgive us for not being obedient in loving our enemies and even our friends in a way that we want to be loved and forgiven. Help us O Lord to empower you to work in our lives and the ones we have hurt and of those who have hurt us. Please forgive them and us, for the many times that we really did not know what we were doing... in Jesus' Name, amen.

BIBLE VERSES FOR THOUGHT ABOUT FORGIVENESS, PEACE, WRONGING OTHERS AND BEING WRONGED.

John the Baptist's father Zacharias, when he was filled with the Holy Spirit after John was born and he gave him the name John, and prophesied and said of Jesus that He would:


Many see in these next verses that verse 38 is about money only. However both vs. 37 and 38 are about the heart and what proceeds from it as well as the measure thereof:

Copyright © 2014 E. Cockrell May be copied for personal study or instruction but shall not be copied and/or distributed in whole or part without permission or for financial profit.

FORGIVENESS: WHY DOES JESUS COMMAND US TO FORGIVE?
Realizing the power & importance of forgiveness versus the power & damage of unforgiveness.
​THE HIGH COSTS OF UNFORGIVENESS
Unforgiveness can cost a person tremendously, both now and eternally.


Copyright © 2014 E. Cockrell May be copied for personal study or instruction but shall not be copied and/or distributed in whole or part without permission or for financial profit.