SOME KEY COMPONENTS OF THE BOOK OF REVELATION 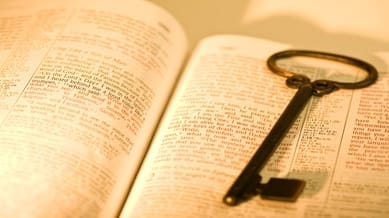 ROMÂNĂ
One of the most exciting things about the book of Revelation, is that it is from Jesus Christ Himself, given through John, to His body/His church. How exciting is this? An epistle from Jesus Christ given to us by way of John! Notice how many times Jesus says to John, "write" or "do not write" certain things. John was obedient and wrote this book as directed by Jesus Christ our Lord!

Another exciting thing about the book of Revelation, is that, it is "throne-centric"... Notice Jesus is speaking to the seven churches from heaven... where the 7 menorahs (lampstands) are. John is called up to heaven to see the Scroll with 7 Seals and find out if anyone is worthy to open it. We see what goes on in heaven and it is all "throne-centric" there. What happens on earth is revealed; but it is still... "as from heaven" to us.

Lastly and not to say the least, it is our hope! The rewards for choosing love and obedience to God, are listed at the end of each of the seven churches! The rebukes to them, that we ourselves need to watch out for also, are listed there. God does not want us ignorant! As He reveals the future to us, we can always see the end and take comfort that He wins and with Him, we win! We have a blessed hope and a glorious future. He tells of heaven and the wars and the victories over sin. He tells what heaven is like for our joy and hope and He tells of the reality of hell, letting it be a warning to all.

This wonderful book, "has been written" for us to take hold of it and realize who we are in Christ today and who we will be in Him in the future also! Hallelujah for the book of Revelation of Jesus Christ as given to John!

Jesus Christ, the Son of God, Who is, Who was and Who is to come, the Almighty (Revelation 1:1-22:20)
He is the Shepherd of the 7 churches, the only one worthy to open the 7 Seals and who does. He will come on clouds to gather His own and every knee will bow to Him. He will come again later on a horse with the armies of heaven, after the Marriage Supper of the Lamb in heaven, when He comes to take His earth for His Second Coming. He will eradicate the wicked at the Battle of Armageddon and the grapes of wrath will be crushed.

A Scroll sealed with 7 Seals (Revelation 5:1-14,6:1-17,8:1)
Seal 1 White horse w/rider w/bow & crown is given to him to conquer which he does.
Seal 2 Fiery red horse whose rider takes peace from the earth & he is given a sword.
Seal 3 Black horse whose rider has Balance Scales in his hand; huge inflation comes but not to harm the oil & the wine.
Seal 4 Pale horse (sickly green) whose rider was Death and Hades was right behind him kill ¼ of the earth with sword, hunger, death & by the beasts of the earth.
Seal 5 Martyred Souls under the altar cry out, How long until You Lord avenge our blood? The reply is given that not until the number of their fellow martyrs will be completed.
Seal 6 Great earthquake, sun blacks out, moon like blood, stars of heaven fall to the earth like in a great . shaking. The sky rolls up like a scroll, every mountain & island is moved out of place. The lost want to . hide from the Lord they see on His Throne but cannot. The rapture process is beginning to happen.
Seal 7 Silence in heaven for about half an hour. It is the time of the rapture! The heavenly entourage comes to get the others.

﻿Note: The 5th, 6th & 7th seals will not take that long to happen. The 6th & 7th seals, the sealing of the 144,000 Jews & the first trumpet happen one after the other. The Two Witnesses are killed and dead 3 ½ days and upon their resurrection, so is the rapture. Jesus calls up the last surviving believers from the earth to meet Him in the air and their bodies become like Him. The “clouds” that come with Jesus are angels and the people “dead in Christ”... believers that preceded the living ones whose bodies will rise first and be transformed in the twinkling of an eye. The 144,000 Jews that now recognize when they see the real Jesus, are sealed for the last half of the 7 years. Once the church is secure in heaven and the 144,000 Jews are sealed, the angels with the trumpets can begin.
﻿
A 2nd Scroll (Revelation 10:1-11)
John told to eat it & prophesy! Sweet to taste but bitter in the stomach. (Ezekiel also ate a scroll similarly in Ezekiel 2 & 3)

2 Witnesses/Martyrs (Revelation 11:1-14 - Matthew 24:28)
These Two Prophets (the 2 olive trees of Zechariah 4) who stand and speak for God for the first 3½ years(1260 days) and are killed by Abaddon/Apollyon in Jerusalem and raised back alive again at the rapture. They are powerful prophets who call down fire from heaven, call forth drought & destroy their enemies with the fire from their mouths.

7 Angels with 7 Trumpets (Revelation 8:2-12,9:1-21,11:15-19)
Trumpet 1 Hail & fire mingled w/blood. 1/3 of trees/grass burn up.
﻿﻿Trumpet 2﻿﻿ Something like a great burning mountain cast into the sea. 1/3 of seas becomes blood.
Trumpet 3 Fiery star from heaven- Wormwood falls on the rivers and waters. 1/3 of waters become wormwood & bitter, many die.
Trumpet 4 1/3 of sun, moon, stars struck so that a third of them are darkened. 1/3 of the day and night will not shine.
Three Woes come in conjunction with the last three trumpets
Trumpet 5 / Woe 1 A fallen star from heaven to earth is given key to bottomless pit & evil-like locusts are let loose. Torment by stinging for 5 months, people will want to die but won't be able to.
Trumpet 6 / Woe 2 Angels released who are bound at the Euphrates river. 200 million exuding fire, smoke & brimstone will kill 1/3 of mankind.
Trumpet 7 / Woe 3 The mystery of God will be finished. The kingdoms of the world will have become the kingdoms of our Lord & His Christ. Time of the dead to be judged.

3 Angels of Proclamation (Revelation 14:6-13)
Angel 1 Proclaims that “the everlasting Gospel is to be preached to those who dwell on the earth--to every nation, tribe, tongue, and people.” Calls for all to fear, honor and worship God Almighty, that judgment has come and God is the Creator of everything.
Angel 2 Prophesies the sweet words, "Babylon is fallen, is fallen."
Angel 3 Declares what happens to those who worship the beast and his image, and receives his mark on his forehead or on his hand, he himself shall also drink of the wine of the wrath of God, which is poured out full strength into the cup of His indignation. He shall be tormented with fire and brimstone in the presence of the holy angels and in the presence of the Lamb. And the smoke of their torment ascends forever and ever; and they have no rest day or night, who worship the beast and his image, and whoever receives the mark of his name.

2 Harvests ﻿(Revelation 14:14-20)
﻿Harvest 1 The sickle is thrown over the earth, and it is harvested for the Lord.
Harvest 2 The sickle is thrown again, the grapes of the vine of the earth (the wicked alive at the time, meet their final demise; this is part of the wrath of God) and the blood on the earth becomes very, very deep.

3 Unclean spirits like frogs to prepare for Armageddon (Revelation 16:13-14)
There are spirits of demons, performing signs, which go out to the kings of the earth and of the whole world, to gather them to the battle of that great day of God Almighty. From the mouths of the dragon, beast & false prophet.

Some Key Participants
God Almighty, the Lamb of God, the Lion of Judah, Jesus Christ, Messiah, King, 4 Living Creatures, the 24 elders, the woman of Chapter 12 who is Israel, the 144,000 Jews, the saints and angels above and on earth, the Two Witnesses versus the dragon, his beasts (Antichrist, false prophet, image, etc.), Babylon, the whore and their followers.

Some things to look forward to!
Jesus, face to face! A new heavenly realm, a new earth, the New Jerusalem with many mansions, the River of Life, the Marriage Supper of the Lamb, the Great White Throne of Judgment and the end of evil!

​
Copyright © 2015 E. Cockrell May be used  for personal study or instruction but shall not be copied and/or distributed in whole or part without permission or for financial profit.

CONSIDERATIONS FOR REAL REVELATION UNDERSTANDING
How to study more clearly.
THE SEVEN BOWLS OF THE WRATH OF GOD
A listing of the 7 bowls of God's wrath.
﻿THE SEVEN SEALS OF REVELATION
The 7 Seals with commentary, a chart & how they correlate with other Scripture.
THE SEVEN TRUMPETS & THREE WOES
Understanding the 7 trumpets & that the last 3 trumpets are also the 3 woes.
UNDERSTANDING WHO THE ANTICHRIST IS, THE SON OF PERDITION
He is both false Christ & anti Christ.
WHAT WILL THE TWO WITNESSES REALLY DO?
Understanding their ministry, purpose & destiny.

ANCIENT JEWISH WEDDING CUSTOMS & JESUS CHRIST, HIS BRIDE, THE CHURCH
See some of the amazing correlation of the ancient Jewish wedding customs and the rapture.
AS A THIEF IN THE NIGHT
Discover the real meaning of this often misquoted Scripture.
AS IN THE DAYS OF NOAH
Taking a deeper look at what Jesus said in this verse.
CAN THE RAPTURE REALLY HAPPEN TODAY?
Are there events that must be completed first?
CONSIDERATIONS FOR REAL REVELATION UNDERSTANDING
A little help for greater understanding.
﻿﻿EVERY EYE WILL SEE HIM
Jesus is coming for His bride. And He is not eloping. The rapture will be a huge event.
EVERY KNEE WILL BOW
Father God will have His Son honored.
IN THE TWINKLING OF AN EYE
Something happens in the twinkling of an eye, but it's not the whole rapture.
THE APOSTASY - THE GREAT FALLING AWAY
Understanding 2 Thessalonians 2:3.
THE BIGGER PICTURE, UNDERSTANDING GOD, THE DEVIL AND THIS DAY AND HOUR
We need to see the bigger picture of all that the Bible says about these times, to understand what is really happening.
THE BRIDE OF CHRIST
The Lord is coming back for His church, His bride, that will be faithful and true, even through very hard times.
THE LAST TRUMPET
Is the great trumpet blast of the rapture one of the 7 trumpets of the book of Revelation?
THE LAST TWO GREAT BATTLES
See the timing of battles of Armageddon & Gog-Magog.
THE OPPORTUNITY OF SALVATION DOES NOT LAST FOREVER
Once the rapture & accompanying events are over, God's wrath begins.
TWO DIFFERENT HORSES, TWO VERY DIFFERENT RIDERS, ﻿TWO DIFFERENT﻿ TIMES
The rider of the white horse at the first seal is not the same rider of the white horse at Armageddon.


Copyright © 2015 E. Cockrell May be used  for personal study or instruction but shall not be copied and/or distributed in whole or part without permission or for financial profit.
​​OUR NEW BOOK ABOUT THE END TIMES
IS NOW AVAILABLE!