THOSE ABOUT TO BE GIVEN OVER FOR CORRECTION 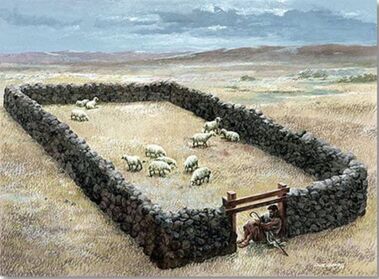 ROMÂNĂ
The Dream or Vision

I saw a large, white angel and a dark, anxious devil, both with large wings. And a group of very pitiful people acting like they were in a herd.

The people were all old; not the slightest hint of anyone young. They were all white and wearing white. All were slowly moving around in the shape of an oval skating rink or roller rink. Some were making the loop so slow that it would seem that it would take a year to make the loop if ever. Others were circling slow in place as if in a daze. Some were almost motionless. They were all handicapped and crippled. Besides their white apparel, white physical hue and white hair, the only other color was the silver of the wheelchairs and walkers that some had.

This was extremely pathetic. As I stared at them, I wondered what it was all about. It was like they were about to be given over to Satan's demon there. And I hoped against hope that I was wrong. As I looked more at the wicked one, he was almost pacing in place; waiting his time.

As I watched, I realized that the people were being kept in place by an invisible hedge. Sadly, the hedge was about to come off for these people. And the demon was waiting. It struck me odd that he seemed unhappy that he was going to have to deal with them.

The hedge did eventually come off and the dark demon flew up and around them and started moving them away like an angel herding cattle. And the good angel had to just stand there and watch it happen.

The people I had seen, were all people who had been truly born again and had been Christians for a long time. But they had chosen pain or failure over and over; instead of believing God and His Word. The Holy Spirit had tried and tried to help them be be free. But in rejecting the Goodness of the Lord and choosing despair over and over, they were bringing it upon themselves.

In the natural, these people might have been Sunday School teachers or pastors or faithful people who sat in the same pew for 30 years. They might have been businesses men or women of worldly success. They might have been red, yellow, black or white. But they had chosen against the Lord in handling life. They had at one time been born-again, but had gotten weaker and weaker spiritually until they were faint and barely alive.

The patient Lord, was being left with only one choice. They had to be given over to the stupidity they had chosen. They believed the lies of the world or devil more than they did the Lord. They were given over to the wickedness that they had chosen over God and His Word. The only hope now, was that they would realize it as their hedge was gone. They were not at this point being “given to hell” as in died and went to hell but they were being given over “to what had broken them” for correction.

Whew. This is a serious thing. Look at all seven letters from Jesus to His churches. He is a serious Shepherd. The people I witnessed, remind me of these people at the Church of Sardis.

Revelation 3:1-6 "And to the angel of the church in Sardis write, 'These things says He who has the seven Spirits of God and the seven stars: "I know your works, that you have a name that you are alive, but you are dead. Be watchful, and strengthen the things which remain, that are ready to die, for I have not found your works perfect before God. Remember therefore how you have received and heard; hold fast and repent. Therefore if you will not watch, I will come upon you as a thief, and you will not know what hour I will come upon you. You have a few names even in Sardis who have not defiled their garments; and they shall walk with Me in white, for they are worthy. He who overcomes shall be clothed in white garments, and I will not blot out his name from the Book of Life; but I will confess his name before My Father and before His angels. He who has an ear, let him hear what the Spirit says to the churches."

In closing, no one that has breath should ever give up! With God, all things are possible. If something has become a stumbling block, repent and start fresh. God always makes a way for us to be over-comers. He does not lie but the devil and doubt sure do. Who will we believe?

Hebrews 12:7-17 “If you endure chastening, God deals with you as with sons; for what son is there whom a father does not chasten? But if you are without chastening, of which all have become partakers, then you are illegitimate and not sons. Furthermore, we have had human fathers who corrected us, and we paid them respect. Shall we not much more readily be in subjection to the Father of spirits and live? For they indeed for a few days chastened us as seemed best to them, but He for our profit, that we may be partakers of His holiness. Now no chastening seems to be joyful for the present, but painful; nevertheless, afterward it yields the peaceable fruit of righteousness to those who have been trained by it.”

“Therefore strengthen the hands which hang down, and the feeble knees, and make straight paths for your feet, so that what is lame may not be dislocated, but rather be healed." Pursue peace with all people, and holiness, without which no one will see the Lord: looking carefully lest anyone fall short of the grace of God; lest any root of bitterness springing up cause trouble, and by this many become defiled; lest there be any fornicator or profane person like Esau, who for one morsel of food sold his birthright. For you know that afterward, when he wanted to inherit the blessing, he was rejected, for he found no place for repentance, though he sought it diligently with tears.”​

Copyright © 2019  E. Cockrell May be copied for personal study or instruction but shall not be copied and/or distributed in whole or part without permission or for financial profit.

A CROWN, A KING AND A SIGNET RING
A revelatory word by Tracy Anne Loosle.
A WORD FROM THE LORD
Given to Ann Webb Davenport @ New Beginnings Full Gospel Tabernacle, Cameron, Texas
AWESOME AND AMAZING LOVE
Upon seeking the Lord about communicating His love, He gave the most amazing dream.
BE ENCOURAGED!
An encouraging word by Corey Austin Shulze.
END TIMES DREAM OR VISION
About a coming disaster that will usher in the Antichrist, first privately among certain leaders.
​JESUS SET ME FREE... AGAIN TESTIMONY
About learning a key to a stronger paradigm regarding the power of patience.
RISE UP!
Overcoming years of depression to become a viable soldier in the army of the Lord.
THE CHOICE
As I stood before the Lord and an angel, I was asked a question.
​
MAIN MENU - ENGLISH VERSION


Copyright  2013  E. Cockrell May be copied for personal study or instruction but shall not be copied and/or distributed in whole or part without permission or for financial profit.